Behind The Mask is telling stories through moving images while using the latest drone and camera technology. In their films they discover spectacular natural landscapes from ever new perspectives, sometimes under water and sometimes from the top out of the air with the help of drones.

In 2015, at the world’s very first Drone Film Festival, the New York City Drone Film Festival the guys of Behind The Mask won the first prize in the category ‘Most Epic Dronie’ with their short film “Floating”. For this years Festival, the guys made a very special Dronie: ‘The Shark Dronie’. The making of the Shark Dronie in 4 parts can you see here.

We keep our fingers crossed for Behind The Mask!

So in December 2015 Behind The Mask went to the Bahamas to shoot the shark dronie and with a special picture idea in mind:

The Case from Behind the Mask on Vimeo.

The cliché of the lonely stranded castaway, who first survived a disaster, somehow manages not to drown or be eaten by sharks and then finally to save himself on a deserted island. We could not wait to put the whole picture ideas that haunted us in the head into reality. Aerials of deserted beaches, the shadow of the palm trees in the blue sea or the castaway all disheveled looking with his feet in the surf of the sea. But the most exciting picture idea shows the castaway under water surrounded by sharks without diving equipment. Only with an outdoor case, which also survived unscathed the disaster. At the end we wanted to creat a small film and photos.

To ensure sufficient shark activity, we have first of all sunk a bait from frozen fish scraps. It was only a matter of seconds to get 15 sharks to appear in order to secure a piece. After approximately 40 minutes the entire bait was eaten and we had the perfect time for our little shooting. Still curious swam the sharks around us, hoping to snatch something edible.

Our protagonist Michael wore a weight belt under his casual trousers, which should keep him on the seabed. His scuba and his flippers he had already taken off and deposited on the ground. He breathed on the second regulator of Mario, who floated like a gas station for air above him. Christian, the photographer conducted Michael in position and gave his OK sign.

It took about half an hour in which Michael always alternating the air for about a minute and stopped to pose for the photo. Then Mario came from above and gave Michael the regulator with air. It took some patience until we got the perfect shot, but in the end it worked out perfectly.

B & W outdoor.cases simply belong in our projects. Moreover, we never had to think aboutit.To transport our equipment flexible and above all safe is a top priority for us. Whether we need to store expensive underwater equipment or camera equipment. There is always the right size and a corresponding inlay available. 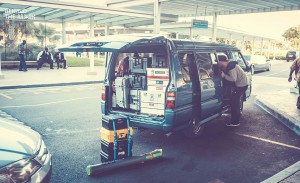 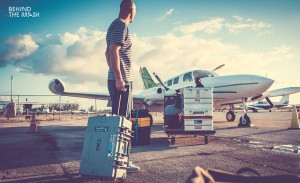 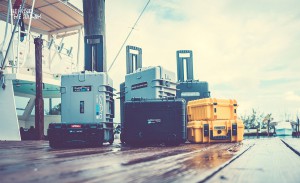 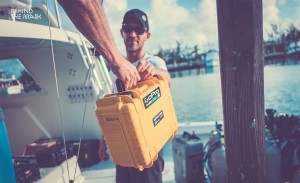 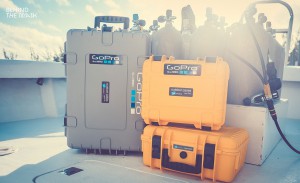 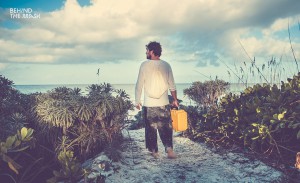